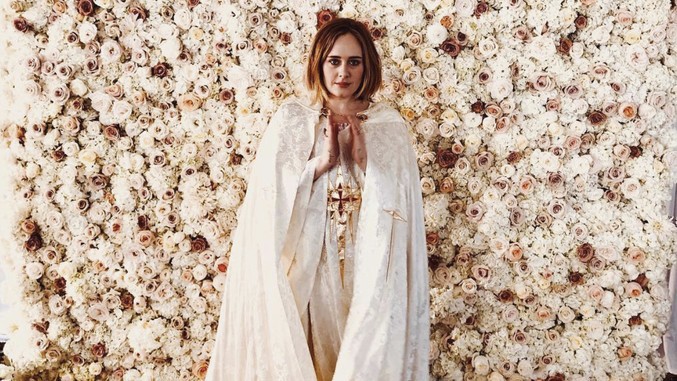 Friends will always there for you, by your side, supporting you - whether you need it or not. This is the case of the British singer, Adele, with her two best friends. The renowned singer and songwriter recently married her two best friends in a gay wedding ceremony.

This isn’t the first time that Adele has shown her support for the gay community. Her two best friends recently decided to join their lives in a gay wedding in which the singer played the part of both the witness and the officiate.

This information was first made known through Adele’s official Instagram account. She posted a photo of herself on Instagram wearing a light-colored dress with a caption that read, "I married my two best friends in January." She was posing in front of a gorgeous wall of live roses, following the publication with, “You know me any excuse to dress up...” In addition to the hashtag #loveislove and the emoticon of the famous rainbow flag, the international symbol of the LGBT community.

For those who wonder who are these newly married due? They’re none other than the famous comedian Alan Carr and his partner Paul Drayton, who’ve been close friends of Adele since before she was famous and before she achieved her global success.

The now spouses explain that Adele not only took care of officiating their gay marriage, but Adele also organized the wedding: "We have known Adele for years, so when we told her that we were getting married she asked us if she could please plan the party for us,” said Alan Carr in an interview on The One Show. "[Adele] is the kindest, sweetest and most generous person in the world. When we arrived, we found a man playing Ordinary People on the piano, she then joined the pianist and sang all of the songs we wanted to open the wedding dance. It was wonderful.”

A gay wedding is the dream of many children, if you decide to take that important step in your life, ask your friends to plan and organize that special day, because it’s your best friends who will know your tastes better than anyone. You’ll surely be as delighted as Alan and Paul with the help of their friend Adele.