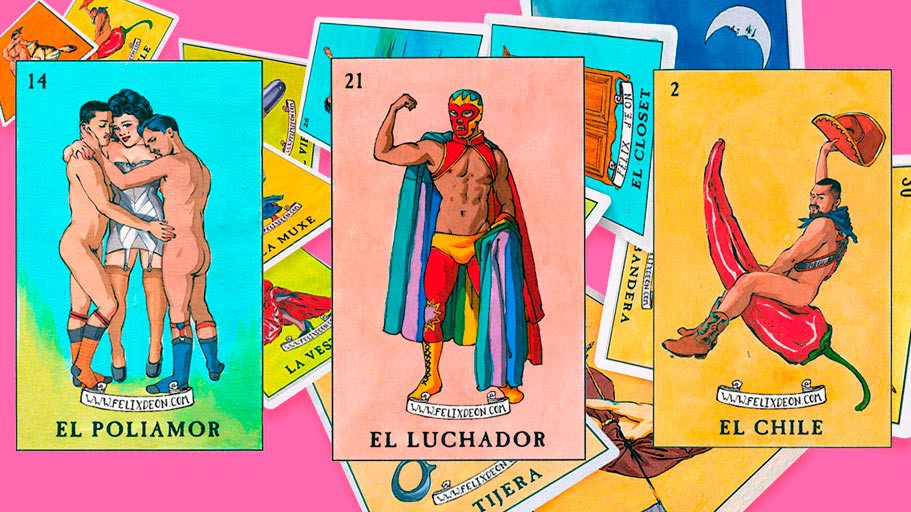 Many times, you’ve played Mexican Lottery, this typical board game which is similar as bingo. The same which entertains anyone and gathers the whole family or friends. Now, a new version of this popular game inspired by the LGBT community has arrived.

The dynamic is exactly the same, it is a game set with somewhat singular illustrations. Here we do not have the red famous devil, the drunken partygoer, the potbellied musician or the bleeding heart. Its “new” characters have another turn, a side that you know too well, which you will identify with and it will make you smile with the sassy touch of each one of its interpretations.

This work of art is the creation of the Chicano artist with Mexican-French ancestry Félix Frédéric D’eon. He was set to rebuild the typical Lottery Game and give life to the Gay Lottery. According to his words, it is a celebration of love and diversity.

“I made a gay tarot a while ago. I love the idea of creating small works that are gradually integrating into a larger work. In the case of Lottery Game, I grew up playing it as a Chicano boy, so I wanted to make my own version, keeping the traditional Mexican folklore”.

Just for you to imagine how the 54 cards of this game are represented, we will tell that some have a homoerotic load. Interesting, isn’t it? For example, in “The Death” the character kisses the naked victim while he takes her to her deathbed. “The Devil”, naked and threatening rests his foot over the naked sinner who’s lying on the floor in a suggesting position. “The moon” is represented by two women on their backs, hugging each other simulating two Frida’s staring at the satellite which everynight “wooes” with Earth. To this group it is also added “The muxe”, the man that assumes female roles and proudly wears the typical costume of its region: Oaxaca.

Yes, we know you want to play it right away. To make yourself with one of this piece of LGBT art works you must go to ebay or look down for it straight on author’s social media. On your next gathering with friends, play it, you will be delighted and entertained with this creation by Félix D’eon.